Over the last years, the videogame industry has faced a surge of "Open World" games, meaning games where, instead of the traditional "levels" organized gradually, there is a single, extensive game environment - a world - where the player can move freely , explore and proceed in the narrative.

The current potential of computers and game consoles allow an incredibly realistic rendering of 3D environments, even if very large. Every detail, from door handles to the facial expressions of the characters, can be modeled with precision, effectively increasing the involvement sensation of the player. The technical developments have been so radical that Elon Musk recently said that "it is possible that humanity is already living in a video game." LINK

Can a virtual space be analyzed and measured as if it were a real space? To understand this question I chose to examine an award-winning game, celebrated as one of the biggest achievement in open worlds environments: Horizon Zero Dawn by Guerrilla Games, published in 2017. I borrowed three parameters typical of the architectural field, which are size, aesthetics and usability, and then I tried to apply them to the virtual space of the game, analyzing them one by one. 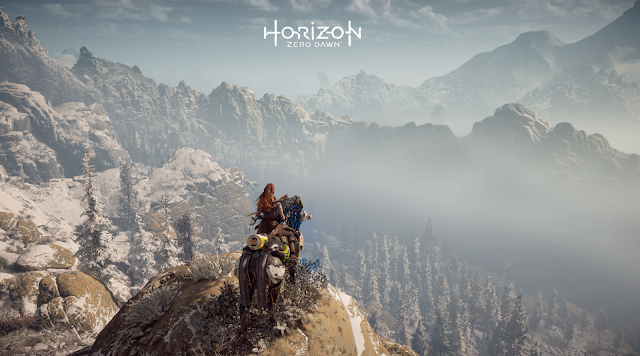 How big is this world? To relate the virtual dimensions to real dimensions, I followed the principle of the "perceived" measures, related to the speed of movement of the player. In the game the player has the opportunity to run and to move on horseback; comparing the two (estimating a running speed of 8 km/ h) I calculated the running horse speed at around 12.3 km / h. (it is an unrealistic speed - a horse reaches up to 70 km / h - but I assume it was a trick used by the developers to not compromise the playability - see below.). To travel the whole world from one end to the other on horseback, it took me 10 minutes and 30 seconds. I was therefore able to calculate the size of the map in about 2.1 * 1.6 km. 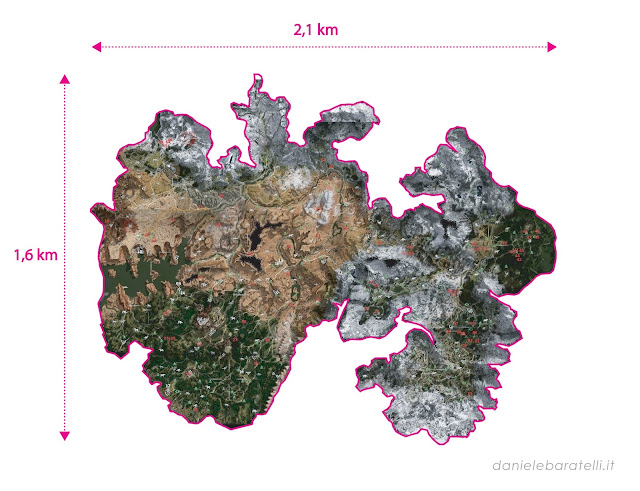 These are its dimensions in relation to a real city. I chose Venice for ease of reading, since the perimeter of the city is clearly defined by the sea. You can see that the Open World map (which contains several villages, lakes and an entire mountain range!) is only around 1/3 of the city, something like 3,3 square kilometers. 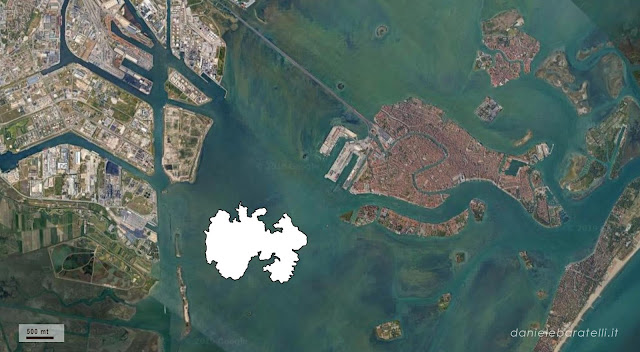 Similarly to the speed of the horse, it is evident that even spaces - be they natural or built - present evident distortions of scale. These are dictated by logic of playability and I suppose they were the crucial point of the development of the game environment: it is in fact a delicate balance between the wish of give to the player a certain feeling of grandeur - like being on top of a mountain, or reaching an isolated village in the middle of the desert - and the need to compress spaces into a manageable size; a similar stratagem can be observed in many amusement parks, such as Disneyworld.

The world described in the game is post-apocalyptic scenario, mainly wild, where several natural areas (mountains, plains, deserts, swamps) are dotted with villages and with a single city - Meridian - located in the center. Ruins of the previous civilization (ours), are scattered here and there, and skeletons of skyscrapers and ruined streets can be explored. Proceeding in the game, we discover that the geographical area taken as a model is in the United States, between Colorado and Utah, and this is also revealed by some interesting architectural details. The most relevant is the reconstruction of the United States Air Force Academy Cadet Chapel, a famous 1962 project by SOM (Skidmore, Owings and Merrill), which we find in the form of a ruin.

Each of the four ethnic groups present in the game has a different appearance and culture, and this is also reflected in the architecture of their buildings, which is incredibly detailed and well thought out. There are the Nora, savages and hunters who live in simple wooden buildings; the Oseram, a tribe that believes in rediscovering ancient buried technologies, whose citadels appear as dense agglomerations of masonry buildings organized around a furnace.

The Carja, on the other hand, are the most developed ethnic group in the game and have a complex architecture, mainly in masonry and abundant with decorations, somehow resembling a mix of medieval and Middle Eastern elements. 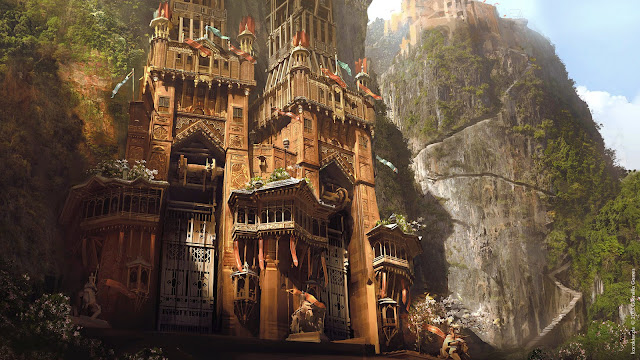 Carja architecture, how to define it?

Let's now see how the player interfaces with the game environment. The most logical development of the Open World concept would be not only having a single game environment, but combining it with a non-linear gameplay. That is, not only can I move freely, but I can also do what I want and in the order I like. Making an architectural comparison, there is an interesting project by the Japanese architecture firm Seijima + Nishizawa that offers a non-linearly organized home, where the spaces are arranged in an unorganized way, without corridors and hallways: each room is a separate event. (unrealized project).

Unfortunately this does not happen. Because this type of games (called RPG or Action RPG) are always accompanied by a narrative which therefore needs a beginning, a development and an end. The "world" therefore becomes only the stage for the development of a linear story. On this aspect the concept of Open World has not yet been explored in a particularly revolutionary way: Richard Moss makes a nice analysis here.

This is the link to the interesting video where the level design manager Eric Boltjes explains the game creation process, which took more than 5 years, and the problems encountered. Karakter Design Studio, responsible for the artistic development of the concept artwork, should also be mentioned. Leaving aside aspects of gameplay, and focusing on design, the judgment can only be positive, both in terms of aesthetics and usability. Above all, it impressed me that how different creative inputs have been designed with a level of realism rarely found in a video game: one example among many, the city of Meridian - the capital of the game - stands out as a fortress inside of a gorge, reminiscent of the Grand Canyon. Due to its position and shape, it immediately reminded me of the Alhambra in Granada, a suspect which was later confirmed when I discovered that in Meridian, just like in the Andalusian citadel, water arrives through an aqueduct, designed in the back of the town. It is a detail that reflects an comprehensive thought, hard to be found in game.